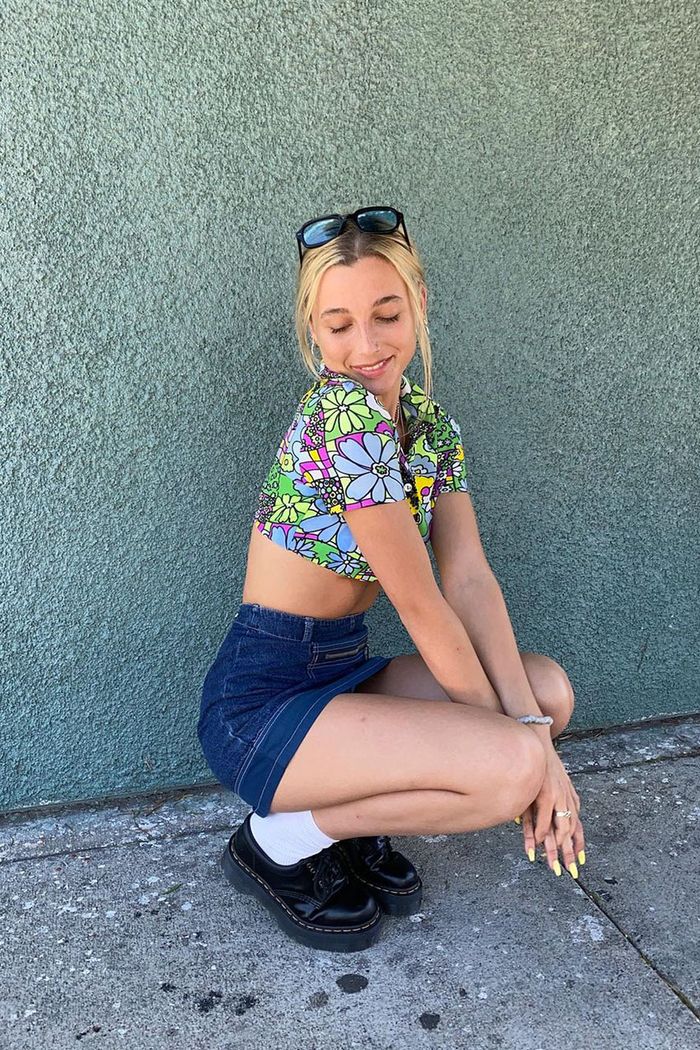 She did at one point. She might still, but we don’t know. Last year Emma did an interview with Cosmo and admitted to struggling with eating disorders her entire life due to growing up “on the internet”, and that everyone she knows and has met has struggled with some form of disordered eating. (she is now 19, and living in LA by herself).

I’ve wanted to make a YouTube video discussing this topic for awhile, but we’ll start here. Emma has a huge following with millions of fans around the world and has cultivated her brand to include her own coffee company and a fashion deal with Louis Vuitton.

Emma, in addition to having a personality on YouTube has been vocal for her love of fashion and clothing and take cares to always post outfit pictures to her Instagram. She’s even released her own accessories and clothing before.

These Instagram photos are usually cropped to not include her face and focus solely on what she is wearing, and has influenced even large companies like Urban Outfitters to sell clothing similar to Emma’s style because it sets trends almost immediately.

This obviously draws attention to Emma’s body. Like other influencers, her body is what she posts more than anything else on her Instagram, and it always has been. When the article came out last year where Emma admitted to struggling with disordered eating and having eating issues, I waited for the last 12 months hoping she would come out to say she was recovered, in-recovery or seeking treatment. Maybe she would admit to struggling, or continuing to struggle with a disorder. But she’s been silent on the issue, other than doing a Harper Bazaar interview for their YouTube channel where she takes you through a typical day in her life and what she eats. (this included her saying that she is “not a breakfast kind of person” and “eating lunch is new for me since I normally always forget or just skip it completely”)

Reviewing a bikini photo posted on Emma’s instagram from mid-2017, it’s obvious Emma’s already slim figure has shrunk to nearly nothing. And this time I’m only left wondering why her family hasn’t intervened, and if they have, why is Emma still posting photos of her body? Saying you have struggled your entire existence with multiple eating disorders and being successful and popular and constantly showing off a body that millions of girls would do anything to have, without making it clear that you are in recovery or healed or putting SOME kind of disclaimer up about how eating disorders are BAD, you are making them look…. well, good. Desirable. Emma Chamberlain said she’s struggled with eating disorders her entire life, but a scroll through her instagram which shows most of her adolescence reveals a “perfect” body that has, in part, kept her at the level of success she is at now. It even catapulted her there. It’s saying to young girls; “it’s okay if you too, have body dysmorphia and struggles with eating and food. I do too! And look at where I’m at in my life. Look at this success.“

Surely Emma would never want someone to be sick because of her, or inspired to be unhealthy due to her in any way. She’s not even 20 and has an entire empire of fans, status, wealth and a brand to carry on her back. But by not squashing out or even just acknowledging and being honest about her eating disorder past, and potentially present, she is letting the people who look up to her fall into the same unhealthy ways in a desperate attempt to “be just like Emma”. Yes, Emma mentions in her Cosmo interview that she hates being referred to as an “influencer” and does not think she is one. She hates the term.. but unfortunately everything Emma does influences those around her… for better or for worse.

Her brand has been built on honesty and an “IDGAF” attitude, but often those people who don’t care are the ones who care the most. And that honesty should include something about her experience with eating disorders. She was the one who mentioned it first and now there has to be follow-up. It’s too much of a slippery slope.

Emma mentioning struggling with ED but not following up leads me to believe she can’t speak more on the issue because it’s still affecting her. She had enough strength to be honest about her past with it, but she can’t speak openly about how she is currently. Likely, she’s still struggling and learning, and I just feel like if that’s the case, she needs to let her audience know. It’s her job to post those outfit pictures showing her clothes and body off, and potentially that’s not something she wants to ruin or effect in any way, but she’s hurting so many young people who look up to her and would do anything to be like her.

At a minimum, maybe she should take a break from posting so many photos of her body until she’s in a place where she can talk about it.

Because unless she says she’s recovered, we can’t assume she has.

At 17, 18 or 19 or 20 years old, I would of watched Emma the same way so many others do. With undying devotion and love, and an extreme desire to emulate. I had the same attitude when I was growing up and would have done anything to be like Hilary Duff from Lizzy McGuire or Jennette McCurdy from iCarl (both of which, coincidentally, went on in their careers to admit to having Anorexia and Bulimia in their adolescence. Both also spoke candidly about going on to get treatment and recover fully, although it was not an easy journey.)

I’m now 24 and watching Emma’s YouTube videos doesn’t inspire the same kind of reverence that it would in someone like my younger sister. Instead I see a girl who is worn down and tired, crying out for help. A vlog from 4 weeks ago that was uploaded to Emma’s channel shows her driving on a small road trip from her home in LA to San Francisco, and in the first 5 minutes of that video she says she’s depressed 4 different times, blaming it on the environment in LA. Every comment on that video is talking about how great the video is, how funny Emma is, and how happy her fans are that she’s back in her hometown on SF. Nobody seems to even notice this girl point blank saying she has depression and is struggling… because that, too, has become part of her brand. The self-deprecation and dark humor has everyone fooled into believing that Emma is just joking, even when it’s clear she’s not.

It’s painful to watch and terrifying for me, someone who grew up admiring the same kinds of girls who also grew up to reveal severe issues with eating. Their bodies were perfect to me, ones I experimented and did everything to replicate for myself. Now I’m horrified to find out that they were sick and the bodies I thought were so perfect were being ravished and destroyed by deadly disorders.

Hopefully this post does something or raises some kind of awareness to something that should be talked about far more. x